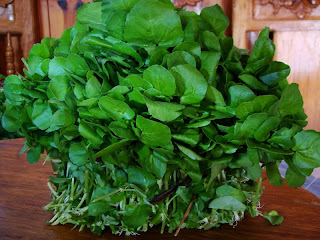 This vegetable is grown on River banks, rice fields, irrigation canals and ponds. Because of abundance, this plant is widely available in the markets of Sagada.

Although usually eaten in small quantities, watercress is a good source of the antioxidant vitamins A, C and E which protect against cancers. In particular, it also contains phenethyl isothiocyanate (gluconasturtin) which combats the carcinogen NNK which if eaten in large quantities protects against lung cancer.

This food is very low in Saturated Fat and Cholesterol. It is also a good source of Protein, Folate, Pantothenic Acid and Copper, and a very good source of Vitamin A, Vitamin C, Vitamin E (Alpha Tocopherol), Vitamin K, Thiamin, Riboflavin, Vitamin B6, Calcium, Magnesium, Phosphorus, Potassium and Manganese. 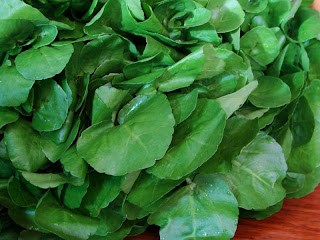 Grown in mineral rich spring water, watercress is one of our natural superfood, gram for gram containing more iron than spinach, more vitamin C than oranges and more calcium than milk.
Watercress contains significant amounts of iron, calcium and folic acid, in addition to vitamins A and C. In some regions watercress is regarded as a weed, in other regions as an aquatic vegetable or herb. Watercress crops grown in the presence of animal waste can be a haven for parasites such as the liver fluke Fasciola hepatica.

Many benefits from eating watercress are claimed, such as that it acts as a stimulant, a source of phytochemicals and antioxidants, a diuretic, an expectorant, and a digestive aid. It also appears to have cancer-suppressing properties; It is widely believed to help defend against lung cancer. Due to its high iodine content, watercress has a strengthening effect on the thyroid gland, thus beneficial for suffers of hypothyroidism.

In addition, watercress is a known inhibitor of the Cytochrome P450 CYP2E1, which may result in altered drug metabolism for individuals on certain medications (ex., chlorzoxazone).
Share this article :