Lycopene, one of nature's most powerful antioxidants, is found almost exclusively in tomatoes.

Following is a summary of the promising lycopene research conducted during the past few years.
Information about Tomatoes:
There may also be an association between heart health and tomatoes. In a study conducted by University of North Carolina scientists, the fat samples drawn from both heart attack sufferers and healthy controls were analyzed for lycopene and other carotenoids.

They found significantly more lycopene in the fat of the controls than the heart patients. Not surprisingly, the diet of the control group was also higher in tomato products. 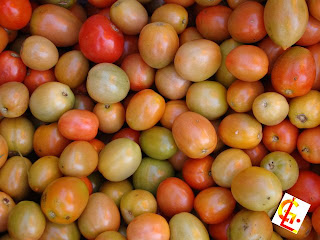 Material taken in part from the Florida Tomato Committee website at www.floridatomatoes.org/education.html

Also about 500 years ago people with money had plates made of pewter. Food with high acid content caused some of the lead (in the pewter) to leach onto the food, causing lead poisoning and death. This happened most often with tomatoes, so for the next 400 years or so, tomatoes were considered poisonous.