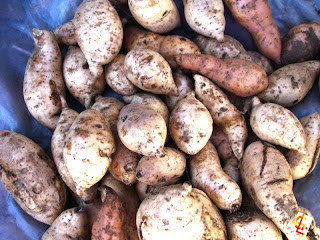 Yeah right, who doesn’t know this vine fruit? It is so important for it served as a staple food for the locals during the early times of the i-Sagada existence. Almost all houses maintain a parch of land for growing this plant. If you ask an old local of how he/she was able to survive for ages, you’ll get a reply, “that is because of “UBI” or Camote.

According to nutritionists at the Center for Science in the Public Interest (CSPI), the single most important dietary change for most people, including children, would be to replace fatty foods with foods rich in complex carbohydrates, such as sweet potatoes.

CSPI ranked the sweet potato #1 in nutrition of all vegetables. With a score of 184, the sweet potato outscored the next highest vegetable by more than 100 points. Points were given for content of dietary fiber, naturally occurring sugars and complex carbohydrates, protein, vitamins A and C, iron and calcium. Points were deducted for fat content (especially saturated fat), sodium, cholesterol, added refined sugars and caffeine. The higher the score, the more nutritious the food.

The reasons the sweet potato took first place? Dietary fiber, naturally occurring sugars, complex carbohydrates, protein, vitamins A and C, iron and calcium. The sweet potato received a score of 184; the vegetable ranked in second place was more than 100 points behind with a score of 83.

The numbers for the nutritional sweet potato speak for themselves: almost twice the recommended daily allowance of vitamin A, 42 percent of the recommendation for vitamin C, four times the RDA for beta carotene, and, when eaten with the skin, sweet potatoes have more fiber than oatmeal. All these benefits with only about 130 to 160 calories!
Share this article :