In the Philippines Basketball reins the sports minds of the people. Sagada proves to differ. Baseball and softball is such a popular sport that almost everyone knows how to play the game.

Baseball and Softball – A proof of American influence and being the most popular sport, athletes from Sagada dominate the Province and Region in sport competitions.

Ganduyan Bucks – this is the most popular team in Sagada, composed of elementary and high school students backed by teachers, coaches, and community individuals.

Basketball – almost all schools in Sagada contain a Basketball court in their compound. Men and kids enjoy playing the sport everyday. Basketball competition draws a lot of crowd and never misses a spot in sport leagues. 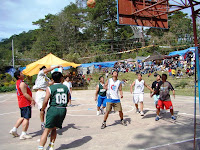 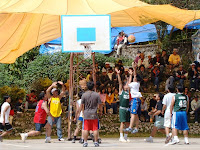 Volleyball – This sport is a popular sport for the women and shemen of Sagada. The municipality sends teams that are highly competitive during Provincial and Regional competitions. 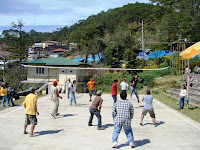 Football – introduced by Steve Jackson of Australia, this sport quickly influenced the youths of Sagada. Every year, teams that are privately funded are sent to compete in tournament cups mostly at Baguio.

Tennis – this sport is maintained by a group who formed the Sagada Tennis Club. Tennis is only played at Poblacion just below the church for it is the only place where a tennis court is found.
Share this article :