A mere 20 percent of the total area is devoted to crop cultivation. Expansion is almost impossible due to Sagada’s terrain. 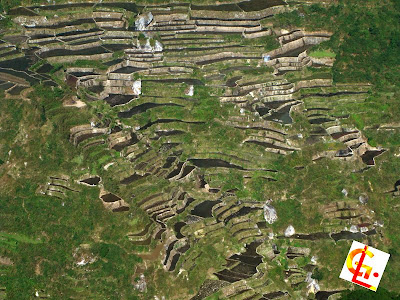 The most valuable lands in the all the ilis are the rice lands. Some of these are being planted with vegetables as second crops. The Um-as are all over Sagada. These used to be cultivated at the foothills of the forests but residents have now planted on their pagpag and batangan. All lands that could be planted with crops are utilized by the umili.

Payew are privately owned and acquired through inheritance, purchase or transfer of land by relatives. In most barangays, residents plant rice once in a cropping cycle. The southern barangays of Taccong, Angkileng, Nacagang and Suyo can afford two cropping since their climate is warmer and is conducive to rice production. In the Northern area of Sagada, the payew near the rivers can be utilized for two cropping. Rice is a major product in Sagada but the produce is not enough for the umili.

The household owners maintain the payew. The tuping and the irrigation systems are regularly monitored. Little damage is addressed right away to prevent major erosion and to ensure that water from the canals is distributed properly.

The um-a are either communal or private. Cultivating Um-a is allowed in forest areas which are unclaimed for long time as long as these are not watershed reserves. The person who makes the um-a, has exclusive rights to the land for as long as he or she continuously utilize it. Once abandoned, the land becomes communal property again and is therefore open to any umili who wishes to use it.

The um-a or ilit are usually planted with beans, corn, squash, cassava, bananas, camote, and many other crops. These are all for home consumption. The produce is often shared with relatives and neighbors. Surplus is brought to the market in exchange for other goods. Leftovers and rejects serve as feeds to hogs and other pets.

The baangan is individually owned and acquired via inheritance, purchase or transfer of land by relatives. The baangan can also be utilized by others for free or for a share of harvest. These are planted with camote, vegetables, bananas and other fruit trees.
Share this article :