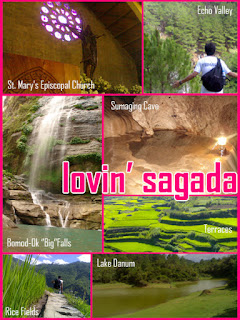 The most obvious reason for tourist influx is its cool natural

Climate - situated 5,000 ft. above sea level, temperature ranges from 5 – 25 degrees centigrade. The coldest month is from November to February while March – June is rather warmer.

Caves - Sagada offers not only its clear skies and its beautiful sceneries but beneath it lies interconnected caves (caverns) and passages and awesome rock formations (speleothemes). A must visit for all tourists of the place. There are atleast four(4) known for tourism sake.

SUMAGING CAVE – the most popular and accessible cave

CAVE CONNECTION via LUMIANG CAVE – if you find it easy going to SUMAGING, try this. Although it requires physical endurance and stamina, it offers a thrilling and exciting experience, but has higher level of danger compared to SUMAGING cave. Entrance at Lumiang or Burial Cave, Exit to Sumaging Cave.

BALANGAGAN CAVE – it is as exciting and thrilling as Sumaging cave but its distance and access to vehicle negates its popularity.

CRYSTAL CAVE – Closed period. For questions about this cave, have it mailed to this address: crazyhim16@yahoo.com

Rice Terraces - Rice terraces could also be found around Sagada. It is quite similar to the ones found at Banuae Ifugao but differs in Walls. Sagada rice paddies are re inforced with stone walls while Banuae has mud walls but it is vast.

Bokong Water Falls - also called the small falls, it is a 30 minute walk from the town.

Aguid Water Falls - requires tough hiking endurance but offers an awesome view of the rice terraces, a walk on the rice paddies and a refreshing swim at the foot of the water fall.

Hanging Coffins - probably the most unique and weirdest culture and tradition that tourists come to visit. These are found anywhere in Sagadas limestone valleys.
Share this article :