Having entered the cave for at least 5 times, I say it is 99 times more beautiful compared to all those caverns I’ve been to.
You will forget all the caves you have been to in Sagada if you had a chance to explore that area. (no kidden).
Sad to say, it is CLOSED for preservation due to vandalism and chipping of those ceturies old speleothems. Since less people had their chance entering that cave, I thought of sharing this to you.
Entering:
After we lit our lamps, we entered a very small rope assisted passage where in we squeezed, turned our body and sliding a 15 meter descent, 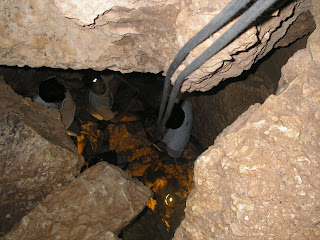 the Descent
and then followed a trail going down until we reached the grand finale of stalactites full ceiling. I have visited many caves of Sagada, having appreciated different rock formations but those were nothing. I was stunned by the awe and wonder that the stalactites stalagmites and pillars have presented.


After this, we rappelled again further down to the great flow stone of crystal cave. The flowstone is huge and vast where you could see rocks in great mass and glittering while clear bluish water flowing and trapped in pools extended our excitement and awe. 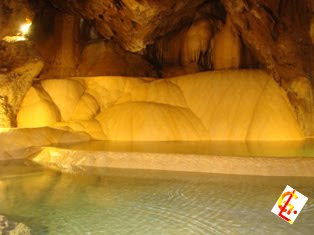 can something be as beautiful as this?
Lots of photos and appreciation we did for that place, we preceded until we passed by a tiny passage requiring each of us to crawl, crawl like a snake not like a lizard. We used our shoulders instead of elbows or arms. 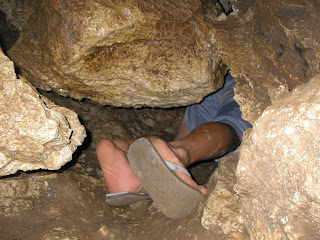 and at the other side! 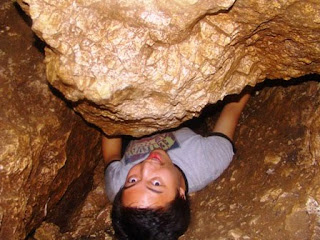 crawling the snake way is not an option
After that passage we made our way to a series of pools and a water fall wherein we have to climb the fall itself, getting our selves wet and freezing. Along the trail, you’ll still be awed by magnificent speleothemes, you just can’t stop looking. While walking, tiny straws or pencil like fragile stalactites are hanging above the ceiling. 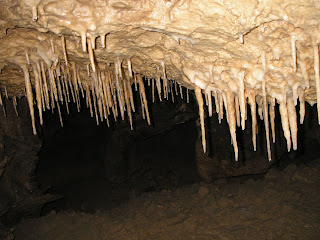 @left: the grand formation @right: straw like pencils
It tempts you for a touch but you should be disciplined not to. Breaking one of those stalactites is a crime. Imagine how a stalactite grow each centimeter for some hundred years then there you are, disturbing its existence.


Superb Flow stone formations
Anyway, after that you would pass by a muddy tunnel or subway like passage. 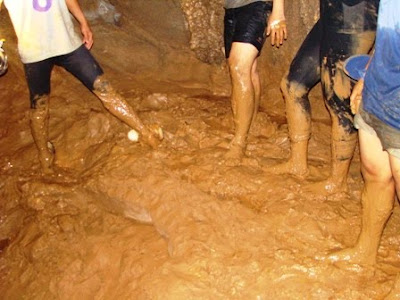 It is muddy and watery. Then comes the exit, the hard part. It is so muddy while the rocks are sharp so we had to be careful as always. 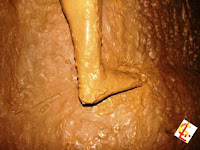 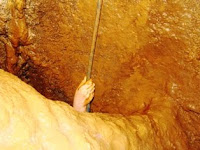 Again we descended into a slippery area leading us out to . We then went down for a wash near the kings formation and made our way out from there. 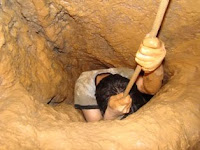 This cave, exciting as it may seem but behind those joy and happiness are high risk dangers, presence of hardships, long ours of spelunking and death defying rappels.
The Adventure is a total hardship and way muddy

you will end up dirty, messy and exhausted like these people. 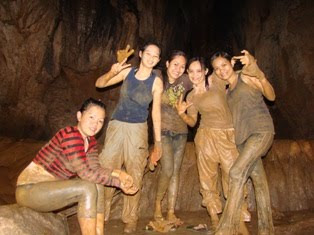 In the future, this will cave will be opened for the public, but not for everyone, but for the fit, strong and experienced spelunkers. 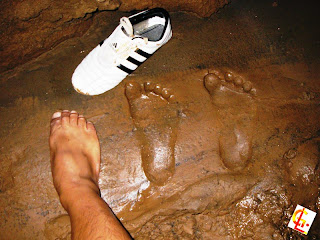 General Rule:
when you enter the Cave, Take nothing but picture, kill nothing but time, leave nothing but foot prints..
The Sweetest rewards come from the hardest struggles!!!

will visit this cave next time i come to sagada. just text me the information on the rates for this, gareth. thanks.

hello,i'm liz. been to sagada lately. wer can i email for suggestions? tnx

Hi! I'm a freelance mountaineer and the first time I experienced spelunking was at Sumaging cave, ever since, I found the activity enjoyable. I would like to venture the Crystal cave since it was recommended by a friend. Is it closed until this time (you last updated this page on 2007)? Also, where can I find the office of the SaGGAS tour guides? I'm a female and I'm planning to go alone, I would be more comfortable with a lady guide, are there available lady guides? Thank you!

hi dianna, im sorry to tell you that, the cave hasn't been opened yet for tours.. Saggas office, is found going down the municipal hall, near the Travellers Inn and Salt and Pepper Dinner, it's quite easy to locate though.

amm, im so sorry, we do not have Female Guides in our group, however, i could refer you one i know who does tour independently..

anyway, for any more questions, please e-mail me here at Crazyhim16@yahoo.com

hi gareth, we've been there to sagada before and we're planning to go back. Cave connection is very exciting and adventurous... can we explore now the Crystal cave? Is it open now to the public? tnxs

i just came from sagada with 3 other friends and my first spelunking experience was at crystal cave.. bruised and cut was worth it...the ratio of a tour guide to a guest is 1:1. we stayed at george guest house annex. our tour guide (eric) was nice and friendly and so are the other guys who were with us at the crystal cave, kevin, ben and lester...i'd say, i'll definitely visit sagada again and check out the other breath taking views. spelunking is not for everyone especially the CRYSTAL CAVE... one great experience that i will forever tell! :) SAGGAS you're the best!

7hrs inside the cave, time flies talaga =) missing sagada so so much, perfect place to explore the beauty of nature =)

just visited Sagada...i really wanted Crystal cave but its at P2,500/head...way up on our budget! plus a guide friend shared on the cave's "preservation" status... He said its not all about the money which made us think twice...but anyway, i enjoyed my Lumiang-Sumaging cave connection and Balangagan cave....

I've been in sagada just 5days ago. I haven't had a change to visit crystal cave due to limited time. I'll be planning to go back on December. Is it already open? And how much it cost for entering it?